An energy overhaul at Ken’s SuperFair Foods is helping more than just the environment.

“It started when we wanted to brighten up the produce department,” said Kevin Fiedler, general manager at the Aberdeen store. “Then we learned about all the other benefits of going ‘green.’ ”

The changes have meant a 21 percent reduction in electrical usage, Fiedler said. Ken’s will save an estimated $18,970 a year in electricity costs, he said.

In addition, there are tax benefits for businesses that install new equipment. Ken’s can file for a one-time tax incentive of $56,957. The Section 179 Internal Revenue Service deduction was part of the federal stimulus package passed early in the Obama administration. The deduction expires at the end of the year. 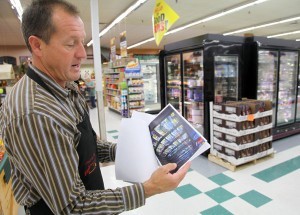 The total savings for Ken’s this year, including the one-time exemption, will be $75,927, Fielder said.

Reducing the use of electricity manufactured from burning fossil fuels helps decrease carbon dioxide, a greenhouse gas that has been linked to global climate change. Ken’s overhaul included all new interior and exterior lighting as well as the installation of equipment that regulates the coolers and the freezers.

Paul Vetch, store manager, said that as far as he knows, Ken’s is the only grocery store that has had such a complete energy overhaul.

“We are the first green grocery store in South Dakota,” he said. “The good thing is that it actually saves us money. I did not realize that in a sense we were paying a monthly penalty for our inefficiencies.”

While the business’ initial cost of the overhaul was significant, it should be paid for through energy savings in three years, Fielder said.

The most striking change is the improved lighting, he said.

In the main part of the store, old fluorescent lights in traditional fixtures were replaced with high-efficiency fluorescent bulbs with reflectors behind them. The reflectors push the light toward the floor.

“We were able to reduce the wattage and the number of bulbs and still get 20 percent more light,” Fiedler said.

In the produce section, the savings are even greater. Light-emitting diodes — known as LED — were installed in the track lighting fixtures, creating an 86 percent energy savings in that area, Vetch said.

While LED bulbs are much more expensive than regular light bulbs — $20 a bulb compared to about a $1 a bulb for incandescent lights — they use less electricity, produce more light and last for many years.

Exterior lights on the store and in the parking lot have been changed to LED.

The parking lot is now 47 percent brighter, Fiedler said. That not only allows customers to navigate the lot better, but it increases security.

“We used to have 350-watt canopy bulbs that we had to replace every three months or so,” Fiedler said. “They would burn out, or the wind and weather would break them. Now these new LED lights could last up to 15 years.”

LED lights are more durable than incandescent or fluorescent lights.

All the lights in the store have or will be changed, Fiedler said. There are new lights in the coolers, in the convenience store and in the pharmacy.

Another part of the energy overhaul was the installation of equipment that regulates the coolers and freezers. Computer technology regulates the start-up and shutdown of the compressors. Coordinating the cooler usage reduces electricity.

“We had no intention of jumping into this and spending this much money,” Fielder said. “But once we learned about the tax benefit, the decreased electrical costs, improved lighting and the fact that it was a ‘green’ project, it made a lot of sense.”

Total Energy Concepts of Mandan, N.D., was the consultant.

“We got the store brighter with a lot less energy,” said Paul Deichert of Total Energy Concepts. “It is a benefit to the store and to the environment. Going green is the right thing to do.”

Fielder said Ken’s is looking into an energy and lighting overhaul for its Britton and Eureka stores. The Groton and Ipswich stores could follow, he said.

“We are going to wait and see the exact energy savings before making decisions,” he said.

Fielder is proud of the store, which was founded by his father, Ken Fiedler, 40 years ago.

“We have a good, clean store, and the new lighting helps us show it off,” he said.